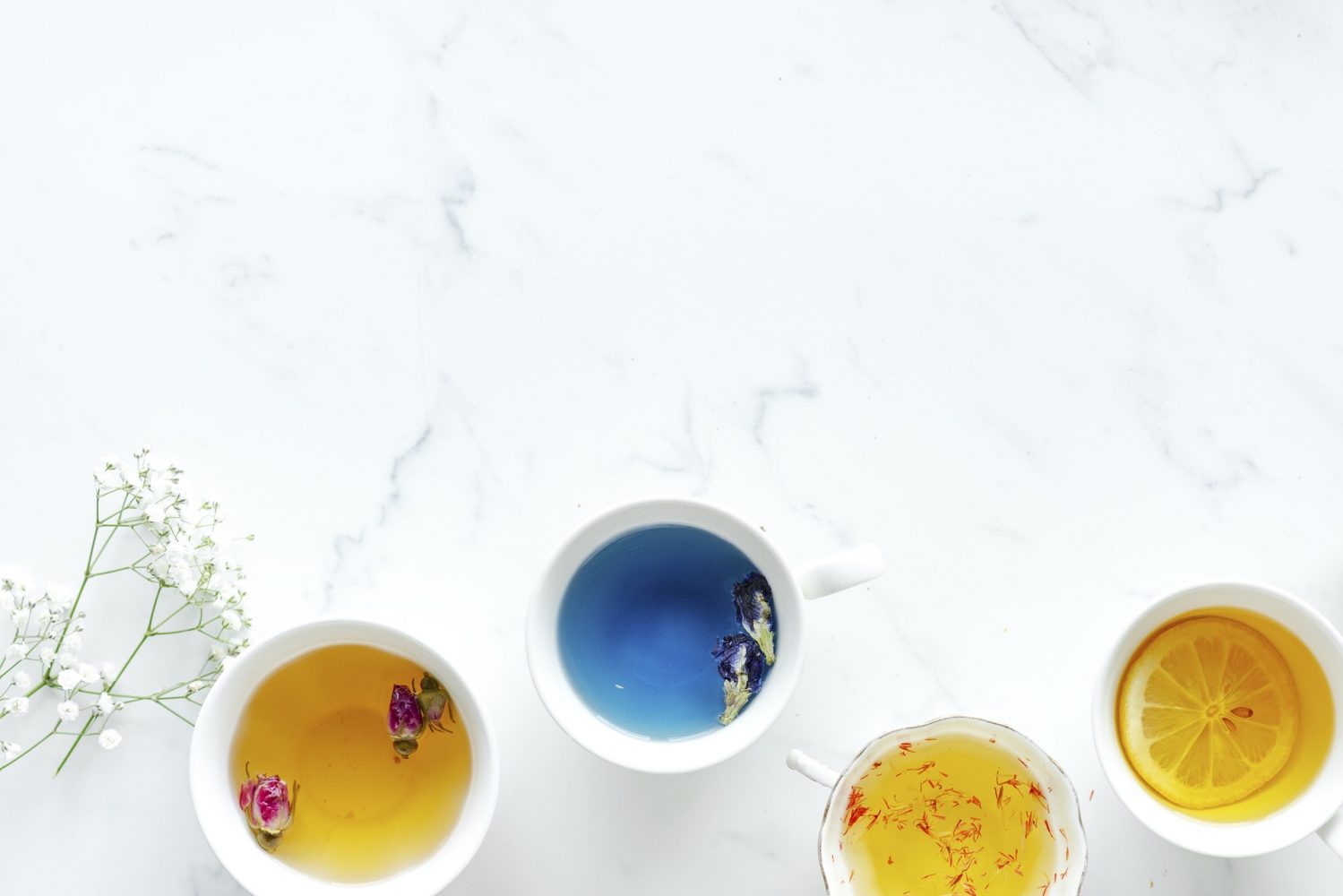 There are said to be two different kinds of tea, herbal and non-herbal teas. Herbal teas are brewed from herb and fruit of many different types and combinations. Herbal teas are decaffeinated, the health advantages of the brew are reported to depend upon the quality of the herb selected. Herbal teas have active ingredients called flavonoids, which are believed to be powerful antioxidants.

Basil is considered to be calming for the nervous system and to help in relieving nausea. Basil is reported to contain antiseptic and anti-depressant properties.
Basil is also said to be good in aiding indigestion.

This tea is believed to be beneficial in aiding digestion. It has a refreshing taste and is said to be an uplifting drink.

Chamomile is reported to be one of the most relaxing herbs around. It is believed to be good to drink for preventing colds and to help in eliminating menstrual cramps.

The herb chamomile has been tried in the past as an anti-inflammatory, as a sedative and also as an anti-ulcer supplement. Chamomile contains high amounts of antioxidants and its rich oil content is said to make it an excellent antiseptic. Chamomile tea is caffeine-free, drinking it is said to help in lowering stress and it is reported to be good to have a cup of chamomile tea prior to going to bed as it is believed that it aids a great night’s sleep.

Drinking Dill tea is said to be very helpful as it eases indigestion and helps regularize the system. Dill tea is also reported to help in relieving stomach aches and has been thought to be a good drink for people that may be suffering from insomnia.

Elderflower is considered to be beneficial for people suffering from colds, hayfever, and influenza. It has features that are said to help promote calmness and trigger a good night’s sleep.

Fennel has a mild distinct aniseed flavor. Fennel is a diuretic and is said to have a calming effect on the stomach. Consuming Fennel tea is reported to be excellent after a meal, as it is believed to help in aiding digestion and to be good for preventing bloating.

Green tea contains high amounts of antioxidants, which are said to help fight to age, fight viruses, and kill free radicals in the body. It is believed to strengthen the skin’s defense mechanism as well as combat tooth decay.

Drinking green tea is said to help boost the immune system, which may help ward off various illnesses. They are also believed to help combat against both cancer and heart disease. Green tea is said to lead to the production of serotonin in the body, which is thought to be a great source of energy. Green tea is also considered to be beneficial for fighting off depression, stress, nervousness and promotes relaxation, calmness, and happiness.

What is The Difference Between Cilantro and…

This tea is thought to be a great antidepressant. Drinking lemon balm tea is said to be helpful for relieving tense headaches and indigestion. Its gentle sedative effect is said to be beneficial for calming anxiety.

Licorice tea is reported to help in alleviating many of the symptoms of headaches and anxiety, and to help in calming the nerves due to the therapeutic healing qualities it features.

This tea is refreshing to drink and is said to promote digestion. Peppermint contains vast amounts of menthol, giving it its characteristic cooling and slightly numbing taste. It is reported that drinking peppermint tea may help relax the nervous system and lower spasm of the gut.

Rose hips feature around eight times the amount of Vitamin C in comparing it to oranges while looking at its weight by weight, this tea is reported to be beneficial for keeping colds and viruses at away. Rosehip tea is usually drunk at any time of the day as it is caffeine-free.

Rosemary tea is thought to be an invigorating and refreshing tea. Drinking Rosemary tea is believed to be good for helping clear the head, easing depression, and helping an individual cope during bad times. It is also thought to improve blood circulation and treat headaches and respiratory problems. Rosemary also features calcium, which is very easily absorbed by the body.

The herb sage has always been related to excellent health and lengthy life. Sage has astringent and antiseptic properties and is thought to be useful in helping to cure a sore throat. Consuming sage is also said to help in boosting insulin activity.

Spearmint tea is believed to be an excellent tea for promoting digestion after a meal. This tea is not- irritant and is a relaxing drink. It features both an uplifting and refreshing taste.

St Johns Wort tea reported helping in relieving nervous tension and anxiety and in lifting depression. It is also said to improve an individual’s mood and general wellbeing. It is thought to be good for people suffering from seasonal affective disorder and to help people that may be suffering from insomnia, headaches, and exhaustion. St Johns Wort tea features flavonoids, Vitamin A, Vitamin B2, selenium, and hypericin.

Thyme contains strong antiseptic properties and is thought to be excellent for combating chest infections. Thyme tea is reported to have a warming effect and may be used to help cool the stomach.

White tea is now increasingly popular due to its taste and health advantages. White tea is from the camellia sinens is a plant and undergoes less processing in comparison to other herbal teas. White tea is not fermented or rolled and has less caffeine than other kinds of tea. It is very rich in polyphenol antioxidants, thought to help in combating cancer.
Tests have shown that drinking White tea may stop DNA mutations, which are said to be the beginning steps towards cancer.

you can buy Herbal Tea From Amazon Store here:

What are Fruits And Vegetables Benefits?

Best Benefits of Orange Peel for Skin and Health