Health Benefits Of Most Important Spices

Health Benefits Of Most Important Spices 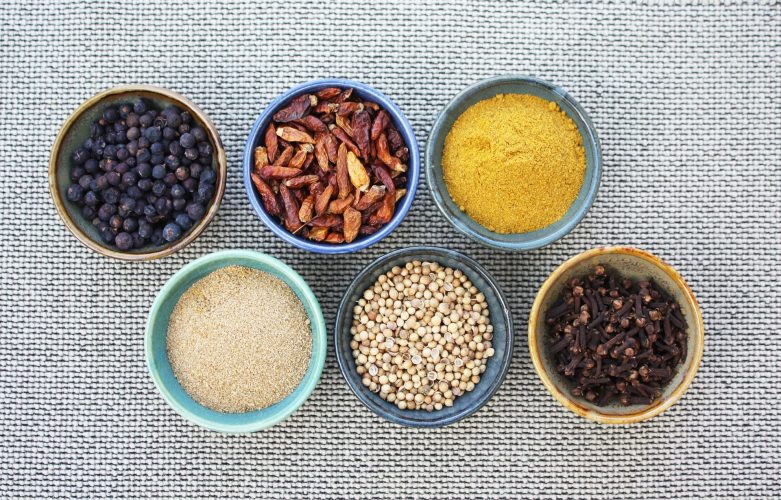 This spice is believed to be useful for treating allergies, eczema, and upper respiratory- tract disorders such as bronchitis and asthma. It is also said to be beneficial for immunodeficiency disorders. It has been said that Black Cumin features anti-inflammatory and anti-allergic properties and that it contains high amounts of antioxidants.

Caraway seeds are believed to be essential for alleviating respiratory problems such as bronchitis and asthma. This spice may be chewed, as it is thought to alleviate gastrointestinal disorders such as diarrhea, colic, and indigestion.

Caraway is believed to be a great tonic as it is enriched in anti-bacterial and antioxidants. It features Vitamins B1, B2, and B3, zinc, and volatile oil.

This spice is reported to be a powerful circulatory stimulant that is said to raise the blood supply to all different parts of the body. This, in turn, may create a feeling of heat.
Cayenne is believed to be essential for preventing colds from forming and dealing with general debility. This spice is known to feature anti-bacterial, anti-cancer, and anti-catarrhal properties. It also features Vitamins A, B2, B3 and minerals, calcium, magnesium, iron, and zinc.

Celery seeds are reported to help promote the elimination of uric acid from the body and are believed to be useful for helping to treat arthritic conditions, especially gout.

This spice has been reported to help treat urinary tract infections and stones. It features urinary antiseptics and is enriched in antioxidants. They contain a wide selection of minerals such as calcium, magnesium, copper, iron, and zinc.

This is a famous spice, said to be contained in cough and cold remedies. It is said to be useful for treating upper respiratory tract infections and contains high amounts of anti-bacterial properties. Eucalyptus is also believed to be rich in anti-oxidants and to be an anti-fungal. It features Bioflavonoid and volatile oil.

Ginger is believed to be a warming and comforting remedy essential to be useful for fighting off colds. Ginger is known to stimulate peripheral circulation and is seen as being an excellent cleanser for the body as it is believed to eliminate toxins. It is thought to be a strong antiseptic and is believed to be highly detoxifying. This spice has Zinc properties and contains Volatile oils.

Best 3 Foods with Vitamin B and Their Benefits

Garcinia Cambogia – Most Uses and…

Horseradish is a circulatory stimulant, believed to be helpful for treating chronic rheumatic conditions, urinary tract infections, and respiratory- tract disorders such as asthma, hay fever, and bronchitis.

Horseradish is believed to promote digestion. It is reported to contain anti-bacterial, anti-cancer, and antiseptic properties. Horseradish is also a strong antioxidant said to help boost the immune system. Horseradish features Vitamin C and the minerals Calcium and zinc.

Reported to be an active digestive stimulant, Juniper is believed to help in detoxifying the body, relieving arthritis, and gout. It is also believed to be essential for treating urinary-tract disorders and is reported to feature anti-bacterial and anti-fungal properties, as well as tannin and Glycoside.

Liquorice is believed to help the body cope well during stressful conditions and is known to be highly beneficial for the adrenal glands.

It is reported to relieve bronchial catarrh and coughs. Licorice has been said to inhibit tumor growth. This spice is a strong antioxidant as it also features anti-inflammatory properties.

Black mustard is reported to be good for promoting blood circulation and to help in relieving colds, fevers, and the flu. Black mustard is viewed as a suitable diuretic, featuring B Vitamins1, 2, and 3. The seeds contain calcium, magnesium, iron, zinc, and potassium.

Thought to help in strengthening the immune system and improving the health of the liver, this spice is also said to help fight off degenerative diseases and stop free radicals. Turmeric curcumin powder is believed to be anti-bacterial and anti-inflammatory, containing Vitamin B3, Iron, and Zinc.

you can buy Spices from the Amazon store here:

Anorexia – What is Anorexia?

This website uses cookies to improve your experience. We'll assume you're ok with this, but you can opt-out if you wish. Accept Read More