The Rosemary plant is a herb that has been used for centuries in cooking and medicine. It has amazing health benefits, such as antioxidants, immune boosters, and anti-inflammatory properties. Learn what makes rosemary so special and how to use it in your diety.

A rocky shrub in the wild, the rosemary, from the family Lamiaceae, can reach 2 m in height, in cultivation. It is recognized, easily, all year round, erected in the middle of the Mediterranean bushes: its evergreen leaves are wrapped on their edges. They are much longer than wide, with a dark green color, shining on their upper face and whitish tint on the underside.

rosemary flowers, most often of a purplish-blue hue (whites are rarer) are aggregate in short clusters from February to May. the calyx of rosemary has a fluffy appearance, the Corolla is bilabiate and has four stamens, two of which exceed the upper lip. The fruit of the rosemary, of globose form, is a brown tétrakène.

Common names: Rosemary officinal, an herb with crowns, grass with troubadours, incense, a tree of Mary, Rose of Sea, Rose of sailors, Roumaniou in Provençal

History of the Use of Rosemary in Herbal Medicine 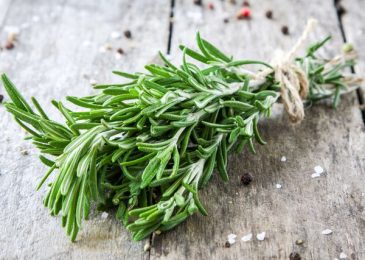 The use of rosemary in perfumery dates back to the 14th century. We then lend to the water of Hungary, the first alcoholic fragrance that has been identified and made up mainly of rosemary, the powers of water of youth. The legend claims that Rosemary has allowed Elisabeth of Poland, cured of her paralysis and her arthritis problems, to become Queen of Hungary, seducing the king, despite her 72 years.

However, he was given stimulating effects on brain activity in ancient Greece. It is for this reason that the Greek intellectuals their heads of crowns of Rosemary. Also used empirically, as a remedy for many ailments, the honey of Narbonne, derived from rosemary, found a place of choice in the marine Pharmacopoeia in the eighteenth century.

Closer to us in the nineteenth century, the Doctor and German Catholic priest Sebastian Kneipp, who actively contributed to the development of Phytotherapy, prescribing to the elderly, rosemary baths. They could thus fight against many conditions: general weakness, eye fatigue, hypotonia, hypotension, hypercholesterolemia, cirrhosis, physical and intellectual overwork, loss of memory, heart problems of origin Nervous, syncope, rheumatism, or paralysis.

The use of rosemary plants within the body has many benefits including improving memory and it helps to balance hormones in women. It can also reduce fat in the body by helping to break down fats. The only drawback of using rosemary plants internally is that it may cause an upset stomach if taken carelessly without consulting with a doctor first.

Rosemary is a plant that belongs to the mint family and is widely used for cooking. Among other interesting properties of rosemary, it contains volatile oils that provide a number of benefits to digestive health.

Rosemary plants are easy to see and maintain in your garden or container. They can grow up to 1 foot tall and need full sun.

Rosemary Plants are some of the best plants available for increasing blood lipids.

Rosemary plants can also be used to create an herbal tea or be added to your food to taste good with a hint of basil flavor.

Rosemary is a herb with a long history of medicinal use, with evidence from the ancient Greeks and Romans suggesting it was used for calming nerves and treating stomach ailments. The essential oil is also often used as an insect repellent, especially against mosquitoes.

Rosemary plant grows in temperate climate zones but can tolerate cold conditions provided they are not too harsh. It is a small plant that produces large leaves that turn purple in the fall. Rosemary has a strong smell that some people find off-putting, but it has been known to have therapeutic properties.

Rosemary has many benefits as a diuretic and as a medicine such as improving circulation and reducing stress. It is also used in cooking and holistic medicine.

Rosemary is also known as an herb with healing properties, which can provide relief from fatigue and constipation. The herb has been used by Greek people for many years to relieve pain and headaches along with other health problems.

A study found that Rosemary Extract had on-target effects on reducing anxiety and depression, while it also increased levels of serotonin and dopamine in the brain.

The people who use Rosemary Plants Antistress know that they can get relief from stress and fatigue without any side effects. It doesn’t matter if you are young or old, male or female, this plant will provide you great benefits.

Rosemary has been used for its antioxidant properties and has been proved to be effective in fighting cancer, heart disease, diabetes, and hypertension.

Rosemary plants contain rosmarinic acid (RA), which is a potent antioxidant that helps to fight cancer, heart disease, diabetes, and hypertension. RA has also been shown to improve the cognitive function of elderly people suffering from memory loss and cognitive decline.

Roses have been used since ancient times as a treatment for skin problems. Rosemary is a perennial evergreen shrub with divided leaves, white flowers, and greenish-gray bark. It grows in temperate regions around the world except in the tropics.

Rosemary plants can be used for treating acne, eczema, psoriasis, sunburns, rashes caused by insect bites or stings. The leaves are also used for treating coughs and sore throats due to their anti-inflammatory properties. They are often placed on the forehead to relieve headaches or on elbows or feet that have become infected due to insect bites

Rosemary plants have been used in moderation for centuries and they have been proven to help with hair growth by accelerating hair follicle cell renewal and promoting hair growth.

Rosemary is an herb that has been used for medicinal purposes since ancient times. It is believed to prevent and treat various illnesses such as digestive problems, coughs, colds, arthritis, bronchitis, headache relief, etc by improving the function of the respiratory system and stimulating the central nervous system.

Rosmarinus officinalis is also suitable as a desiring, to stimulate people who suffer from asthenia while acting preventively against insomnia. It has antiseptic qualities that make it a good agent to clean the skin and sensitive areas or act directly on infected wounds. It can also be used for its antitussive power.

It is the leaves, the flowering tops, that we will have taken care to dry, or the essential oil that is used in herbal medicine.

Use And Dosage of Rosemary

it is then used for rheumatism and stimulation of peripheral blood circulation.

To prepare the basic decoction, simmer 50 g of the plant in 1 liter of water, for 10 min, let cool, and then filter the preparation.

Precautions for Use of Rosemary

At the indicated doses, it is safe. However, it can be warned again not high-dose use of cineole essential oil of rosemary, which could have a neurotoxic or abortifacient effect.

Taken orally, it is contraindicated for children under the age of 12 and people with gallstones or liver disease. Apart from cooking, it is also not recommended for pregnant or lactating women.

Rosemary plants are known for being used as a medicinal herb, with it being claimed to be useful in the treatment of the common cold and flu.

However, rosemary is also believed to have some toxic side effects that can cause damage to human health.

One of the side effects is that it may cause liver damage when consumed with alcohol. Other possible side effects include bleeding stomach ulcers, blurred vision, skin allergies, and irritation of the skin.

At normal doses, the only risk can be nausea. People working with it have been able to develop contact eczema. An important overdose can cause vomiting, convulsions, spasms, bleeding from the uterus, or even a fatal coma.

INTERACTIONS with medicinal plants or supplements

In theory, it can interact with diuretic drugs and iron supplements, but nothing has been observed in practice.

Professor Hostettmann, a well-known psychotherapist, points out that, in addition to its listed properties, it improves concentration. He illustrated his remarks in the book he published in 2013, all about anti-aging plants, indicating that the forehead and temples of children were rubbed during ancient Greece to make them more intelligent.

In the preparation of the decoctions, it is advisable to consult your doctor or pharmacist, to check the correct dosages and to ensure that the recommended doses are respected.

If the use of Rosemary is based more on experience over the centuries, more recent studies focus on the benefit it could bring by its antioxidant effects, in the treatment of certain cancers.

All You Should Know about Massage Benefits

Moringa Powder Dosage – How Often Should I Eat Moringa?