What is Goldenseal? Uses and Health Benefits 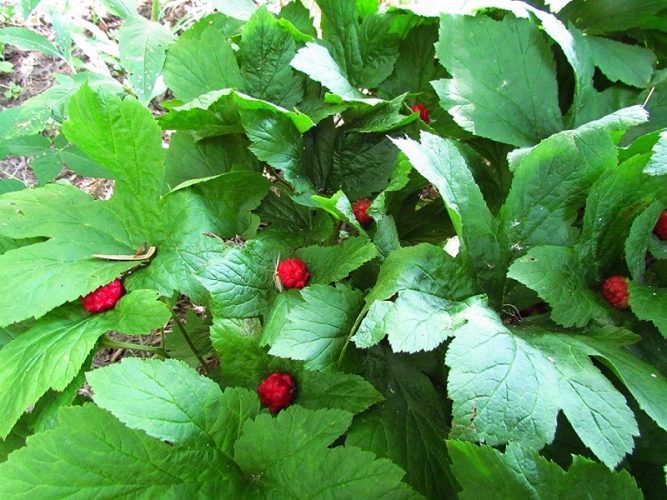 Goldenseal, or Hydrastis Canadensis, is a native plant to North America. A member of the buttercup family, goldenseal grows on shady, northern hillsides and in rich soil near rivers. Although most plentiful in the Ozarks, the Appalachians, and the Mississippi and Ohio River valleys, it also grows in many other areas.

American Indians used goldenseal for many different purposes. The herb’s rhizome and root supplied them with a brilliant yellow dye that they used on their weapons, clothing, as a paint for their faces, as well as for numerous medical ailments.

Goldenseal bears a resemblance to ginseng (which is a relative of goldenseal), grows in the same kind of habitat, and is about the same size. Because of its reputed overall tonic effect on the entire body, goldenseal is sometimes referred to as “poor man’s” ginseng.

Goldenseal is a perennial herb with yellow rootstock, marked by annual growth rings. Its purplish stem grows about 1 foot tall and bears two large, five-part leaves that are slightly hairy. Goldenseal develops one flowerhead, a greenish-white or rose color, and the flower turns into a fruit that resembles a large raspberry. The stem just below the surface called the rhizome and the long and slender roots are the parts used by herbalists.

The tonic effect of goldenseal is of healing value to the liver. Also, by combining it with bicarbonate of soda, goldenseal is an excellent mouthwash for the relief of sores in the mouth and of the gums. It is recognized as a superior aid for sore throat. And it has been used by doctors for ulcers of the vagina and uterus, as well as eczema and smallpox.

Goldenseal root is antiseptic and hemostatic, which means it stops bleeding. It is used as an effective eyewash and brewed as a tea for stomach aches. But goldenseal root is very poisonous in large doses and should not be taken internally without medical supervision.

Goldenseal has been found to contain alkaloids hydrastine and berberine. These are astringent and have antibiotic properties. Herbalists consider goldenseal one of the best herbs around. The dried powder of the root can be directly sprinkled on wounds to disinfect them and promote healing.

However, great discretion has to be practiced when using goldenseal to treat any internal condition. If used correctly and sparingly, goldenseal is considered a very effective herb for correcting a variety of conditions.