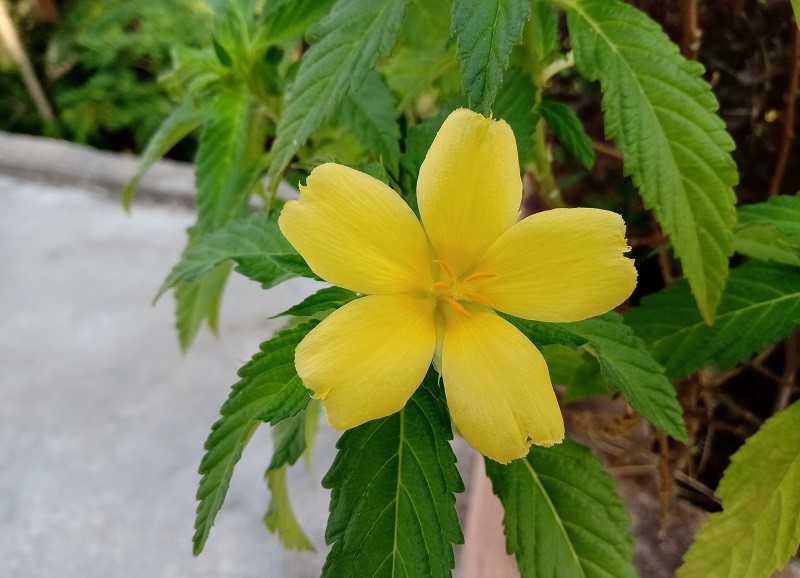 Damiana herb has a botanical term of Turnera diffusa var. Aphrodisiaca belongs to the family Turneraceae. This kind of medicinal herb is native to South America, the Caribbean, Texas, Mexico, and Central America in humid conditions. In around 1874, Damiana was introduced as a medicinal drug and first come in the form of a fluid extract herbal. Three distinct varieties or species of plants under the name of Damiana, are occasionally found in the health market and are derived from as many different sources. The true Damiana is derived from Mexico. The genus Turnera is a small family of chiefly tropical American plants allied to the Passifloraceae. The flowers are small, yellow, and in the species that produces damiana, subsessile near the end of the short branches. The calyx is tubular, hairy externally, colored like the petals, and 5-toothed at the apex. The petals are 5, yellow, and inserted on the tube of the calyx. The fruit, specimens of which are often found with Damiana leaves are dry, globular, and about the size of a large hemp seed.

Damiana is a relatively small shrub that produces aromatic flowers. It blossoms in early to late summer and is followed by fruits that taste similar to figs. Damiana has an odor somewhat like chamomile due to the oil present in the plant.

The leaves have traditionally been made into tea which was used by native people of Central and South America for its aphrodisiac effects. It has been recorded that the Indians drank Damiana tea mixed with sugar for its ability to enhance lovemaking. Nowadays, Damiana herbal tea is widespread and quite popular.

As Damiana herbs have an action of stimulant, mildly diuretic, mild laxative, nervous restorative, anti-depressant, testosteromimetic action (evidence of efficacy derivative), and urinary antiseptic; mostly, Damiana is used by people as medicinal herbs for strengthening the nervous system, anxiety, depression, sexual inadequacies with a strong psychological or emotional element, depression and debilitated states in both sexes, atonic constipation, and also to establish normal menstruation at puberty.

Mexican damiana (Turnera aphrodisiaca) as found in the market, consists of broken leaves mixed with fragments of the branches and sometimes with seedpods. The leaves are less than an inch long, obovate, wedge-shaped, and taper at the base to a short. A variety of damiana, closely resembling the preceding, is derived from California. Because of those actions, people make use of the health benefit of Damiana herbal leaves for strengthening the nervous system, anxiety, depression, sexual inadequacies with a strong psychological or emotional element, depression and debilitated states in both sexes, atonic constipation, and establishing normal menstruation at puberty as well.

The medicinal drug of Damiana has been almost eulogized for its positive aphrodisiac effects, acting energetically upon the genito-urinary organs of both sexes, removing impotence in the one, and frigidity in the other, whether due to abuses or age.

Many physicians who have tried the health benefit of Damiana, deny its possession of such virtues, but the friends of the drug attribute their failures to the use of the spurious articles. It will very likely be found to possess laxative, tonic, and diuretic properties only.

The aphrodisiac effects following Damiana herbs use, no more prove that these belong to it than the same effects, that not infrequently appear after the employment of many other agents prove that such agents possess similar excitant virtues.

Upon the system at large, it exerts a tonic influence and is useful in some cases of chronic cystic and renal catarrh. It relieves irritation of the urinary mucous membranes, improves digestion, and overcomes constipation in some instances. In respiratory disorders, it may be employed to relieve irritation and cough, and, by its tonic properties, to cheek hypersecretion from the broncho-pulmonic membranes. The dose of the fluid extract is from 1/2 fluid drachm to 1/2 fluid ounce; specifically damiana, 5 to 60 drops.

Besides, nowadays people make use of great combinations of Damiana herbs as a nerve tonic Avena sativa; Cola vera, and Scutellaria lateriflora depending on the situation. However, the specific indications and herbal uses of Damiana were amazing to relieve irritation of the genito-urinary mucous surfaces and also sexual weakness and debility, with nervousness and depression.

The Healing Power of Dandelion Herb

Capsaicin – Hot Cayenne Pepper is Good for you